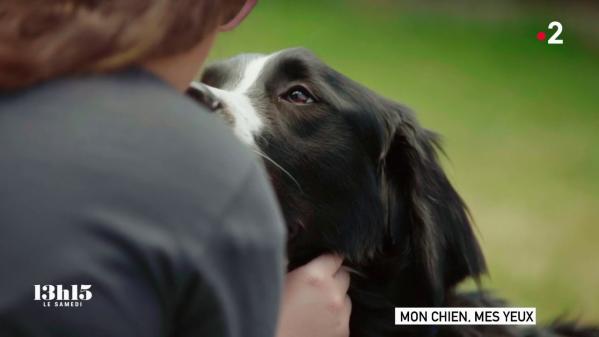 Before meeting the guide dog Nitro at the Frédéric Gailland Foundation, where such companions are trained for adolescents, Romane used to move around with a white cane: « When there are stone poles or manholes, the cane hits them, while the dog will avoid them. It is much more reassuring and fluid. », explains to the magazine « 1:15 pm on Saturday » (replay) the young girl who has just made her comeback in second with him.

The arrival of Nitro not only made the high school student more independent. She also transformed her family life, now much more relaxed: « Moments of complicity like that in the garden, I’m not going to say that it was non-existent, but it was very rare, said the father. She very rarely left her cave and was in her isolated room a lot, listening to music. Since she got Nitro, it’s a little girl who discovered that there was a house with parents, a living room, a dining room… «

« I immediately felt a kind of connection, a bit like a feeling, remembers Romane. There was something between him and me. It’s almost magical, actually. We don’t realize what’s going on, but it’s almost obvious. We say to ourselves: ‘But it’s him!’ Before having the dog, I suspected that it was an extraordinary comfort, that it was top notch, but I would never have imagined a quarter of what I live today. «

Romane and Nitro fell in love with « the first guide dog training school in Europe exclusively for children who are blind and visually impaired or have other forms of disability », located in Isle-sur-la-Sorgue, in the Vaucluse. Such dogs are generally reserved for adults. Violette Gomard, guide dog trainer, remembers: « Romane has been experimenting with several dogs and when she got Nitro it was obvious. He is cautious, which reassured her a lot. And his way of addressing Nitro made him feel felt immediately confident. It took right away. It was too good. «

> Replays of France Télévisions news magazines are available on the Franceinfo website and its mobile application (iOS & Android), section « Magazines ».