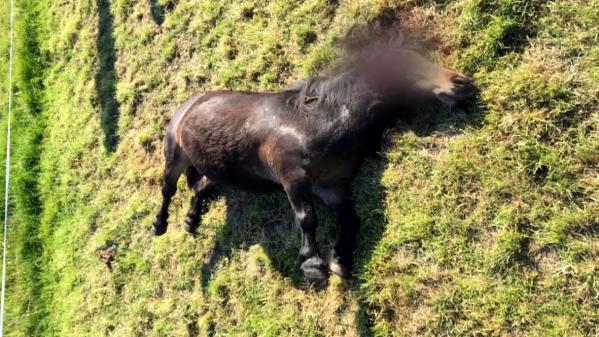 « Acts of absolutely incredible cruelty. Acts of barbarism ». This is how Julien Denormandie, Minister of Agriculture, described the mutilation of the eyes, ears and genitals of many horses. But are we sure that these acts are all attributable to human beings? The gendarmes are sure about some cases. « There are about twenty that seem very interesting in terms of investigation. There is a proven human intervention », reveals Éric Bayle, of the Central Office for the fight against environmental damage (OCLAESP)

But in other cases, the mutilations could have been caused by other animals. « These are accidental deaths which gave rise to the intervention of scavenging animals », adds Éric Bayle.

In mid-August in the Loire, a dead horse of old age was found with mutilations. The investigation determined that the mutilations were of animal origin, presumably a badger. Equine veterinarian Lucile Falque does not subscribe to this animal thesis. « An owner never called me to tell me that an animal had devoured him during the night. A wild animal would not attack the ear »she says, although she concedes that horses can injure themselves on their own with some scratches.

Some horse owners may have reported more of this type of mutilation than before. And the media coverage of the case has given ideas to some according to the gendarmerie. « We have what are called copycat (imitators) people who want to give themselves some media insight by committing these facts », adds Éric Bayle from OCLAESP. Imitators and more frequent reports could explain why the number of mutilated horses has increased in recent weeks.