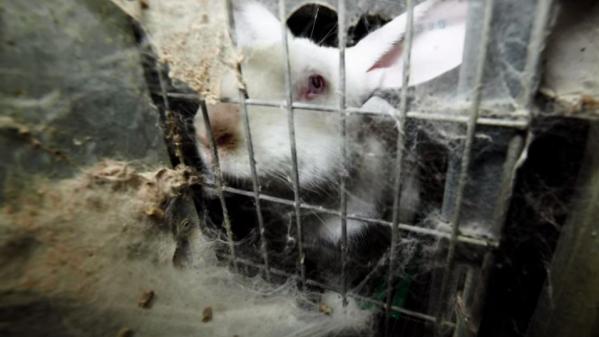 This investigation comes out two days before the examination of a bill in committee at the National Assembly concerning animal welfare.

« Overcrowded cages, wire mesh floors, high mortalities » … The animal rights association L214 released a new video on Tuesday, September 29 of a cage rabbit farm in Morbihan. This investigation comes out two days before the examination of a bill in committee at the National Assembly concerning animal welfare.

L214’s investigation « shows terrible images of a large intensive rabbit farm located in the town of Augan, in Morbihan. More than 40,000 rabbits are locked up there in small cages on a wire mesh floor », emphasizes the association. In the images, we see in particular rabbits crammed into these cages, without access to the open air, others lying on droppings or thrown in garbage cans. « According to death monitoring documents, nearly 300 rabbits die in this farm every week », according to the association. Contacted by Agence France Presse, the breeder did not respond.

The association does not fall within the scope of a breach of the regulations because « there are no specific regulations for rabbit farms, as may be the case for laying hens », explained Sébastien Arsac, director of investigations at L214. With 22% mortality, rabbits sent to the slaughterhouse after 72 days, a space reduced to the equivalent « an A4 sheet », Augan breeding is representative of French breeding, according to L214. Some 99% of the 30 million rabbits slaughtered each year in France are raised in battery cages, according to the association.

The investigation was published two days before the examination of a bill in the Economic Affairs Committee of the National Assembly relating to « measures to ban certain practices that generate suffering in animals ». The text takes up a large part of the « referendum for animals » project launched in early July with the support of several large French bosses in the technology sector, and which has collected over 780,000 signatures.